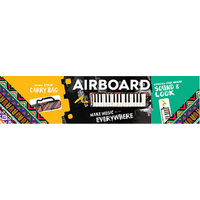 A New Instrument for a New Generation HOHNER invented the melodica decades ago and it became a featured instrument in so many genres including funk, dubstep, reggae, jazz, pop and folk etc. that it demanded a new personality.

With its cool new appearance, striking padded travel bag and redesigned BlowFlow™ mouthpiece, the AirBoard is designed for a new generation of musicians. The HOHNER Airboard was featured on the Today Show as part of a segment about the hottest easy to learn instruments.

The AirBoard requires no computer, no cables, and no power source. At it’s affordable price, anyone can grab an AirBoard and jam anywhere joining ukulele players, guitarists and other acoustic musicians. The AirBoard enables musicians to add a unique look and sound to their performances.

The AirBoard is available in 32 and 37 key versions and you can also download the AirBoard app for iPhone and Android, providing a virtual version of the instrument for tablets and smart phones.