Hohner Ocean Star 48 Tremolo Harmonica in the Key of C Tremolo is an important stylistic element for the sound of the harmonica in Asian folk music, as well as in traditional Scottish and Irish music. The wistful, floating sound of the Ocean Star creates a sonic landscape which is both exotic and familiar, with a wide, slow tremolo which is perfect for poignant melodies as well as evoking warm nights under the stars.

Tremolo harmonicas
The tremolo harmonica‘s distinguishing feature is that it has two reeds per note, with one slightly sharp and the other slightly flat.This provides a unique wavering or warbling sound created by the two reeds being slightly out of tune with each other and the difference in their subsequent waveforms interacting with each other. These so called 2-voice instruments are ideally suitable for traditional folk music. Tremolo and octave harmonicas are 2-voice instruments, where each blow and draw note is produced by two reeds sounding simultaneously.

In the case of the Octave models, each reed of a pair is tuned exactly one octave apart, creating a full, voluminous sound. With Tremolo models, both reeds produce the same note, but are slightly out of tune with one another, creating an interference beat so that the note sounds with a pulsating tremolo effect, a rapid increase and decrease in volume. This is referred to as „tremolo tuning“. The tonal layout generally corresponds to that of Richter harmonicas. As a rule the channels of 2-voice harmonicas are divided horizontally, so that two channel openings lie one above the other. The purpose of this is to decouple the oscillations of the two reeds which are sounding simultaneously. Otherwise they will tend to adopt the same frequency and vibrate in phase, thus preventing the tremolo effect from occurring.

Tremolo and Octave harmonicas are mainly used for folk music and evergreens. 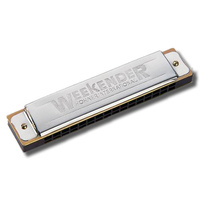 Hohner Weekender-16 Tremolo Harmonica in the Key of C