At the heart of the drum is Rogers legendary floating snare rail system, which provides extraordinary sensitivity and control that has never been duplicated. Hand-built in Roger’s USA workshop, the Dyna-Sonic No. 37-BP is another masterpiece of art and sonic excellence. 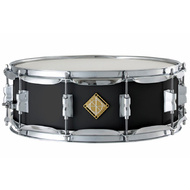