These special production run drums are now available in both high-luster black gloss lacquer and gold sparkle lacquer finishes. Long celebrated for its luminosity and depth, high-gloss lacquer drum finishes provide a robust and seamless shell that is visually stunning. Offered in both 5" x 14" standard and 6.5" x 14" concert shell depths.

Hand-built in Roger's USA workshop, the Dyna-Sonic Limited Edition Custom Lacquer series is another masterpiece of art and sonic excellence. Don't wait - available only for a limited time...

At the heart of the drum is Rogers legendary floating snare rail system, which provides extraordinary sensitivity and control that has never been duplicated. Hand-built in Roger’s USA workshop, the Dyna-Sonic No. 36-GSL is another masterpiece of art and sonic excellence.

1956
With the combined skills of Henry Grossman, inventor Joe Thompson, and marketing manager Ben Strauss, the Rogers Company rises to become a leading innovator in drum & percussion manufacturing at the Covington plant.

1966 - 2006
After an inspired decade at the company’s Covington facility (considered the “Golden Era” of the Rogers brand), the company’s assets are subsequently sold to a series of musical instrument corporations including CBS (1966), Brook Mays (1999), and Yamaha (2006). 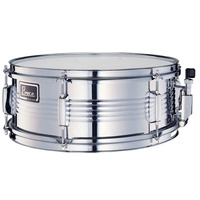